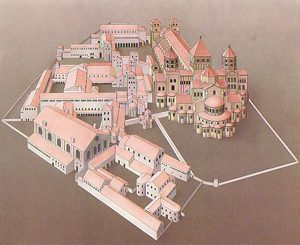 Diagram of the Monastery of Cluny

In the year 1073 Alfonso VI gave the Monastery of St. Isidro de Dueñas to the Benedictine Monastery of Cluny that became one of its priories.

Therefore the Clunic period of this Monastery began and it extended up to 1478. Over the course of the centuries XII and XIII, the monastery transformed its municipality into an immune reserve by means of royal privileges.

Besides it reinforced the control of its economic operation by the use of leasing or lending seeking to ensure the monopoly of its lands and mills.

It also attached importance to its livestock and settled in highland areas and procuring some privileges which allowed the transhumance of its herds. 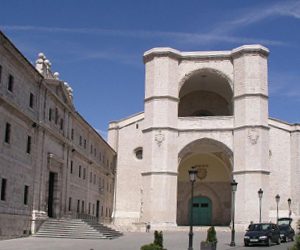 But after the spledour, there was the decay which took place over 14th and 15th the centuries due to several reasons including – the low relationship with the monarchy at that time but the regional and local nobility who required much more in return for their protection and the priories who were more concerned about selling the monastery properties than about the monastic discipline.

Eventually, linked to the idea of renovation and restoration of the Castilian monasteries that the Catholic Monarchs had, it split-off from Cluny and joined the Rule of Saint Benedict in Valladolid. This merger was followed by a considerable effort to retrieve the monastery inheritance that constituted a new stage of economic growth and it let support a better-stocked monastic community.

In 1604 a devastating fire destroyed the Monastery and only the Romanic Church was saved, though really damaged so we can still behold but without its former beauty. 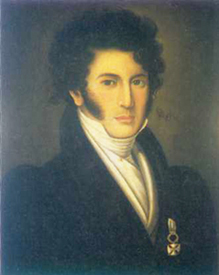 The new and current factory was raised in the Herreran architectural style. With the invasion in 1808, the Monastery was turned into the barracks of the Napoleonic troops which causing the expulsion of the friars and leaving the interior completely spoilt.

It still endured new disasters again in 1820 and 1823 during the second expulsion of the community. In the end, the Monastery was abandoned because of the disentailment of Mendizabal in 1835 turning into a farmstead for 56 long years.