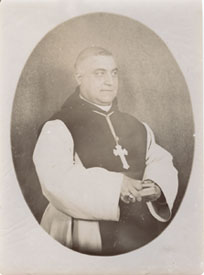 With Mendizabal´s anticlerical laws, the Restoration came and then the possibility to found a monastic community in our Monastery again. This assignment was conducted by the Cistercian order.

The chronicle states that a trip, by October in 1890, which these three characters made searching a place for the foundation – when the train passed by the facade of the abandoned Monastery of Saint Isidro, Dom Cándido exclaimed: “There it is what would fully fill my wishes” – a serendipitous and almost certainly, inconsequential phrase – but the fact was that the family Mr. Sánchez and Mr. Tabernero from Salamanca wanted to buy the realty and purchased it on the 25th October 1890.

After receiving the novelty of the purchase of the property, Dom Cándido, with a pleasant perception, signed the foundation act which marked the beginning of the documented history of the Cistercian life in Saint Isidro de Dueñas, order which still inhabits these walls in Palencia.