This is how the Abbey of Saint Isidro de Dueñas was born.

In the confluence between the rivers Pisuerga – formerly known as Pisorica – and Carrión, the Monastery of Saint Isidro de Dueñas is located in the municipality of Dueñas – Palencia – and it is easily visible as the train commuting between Valladolid and Burgos passes by.

The Roman facade of its church, with an extremely ancient defence tower filled with stopgap repairs that reveal different periods contrasts with the Herreran style of the rest of the building which dates from the reconstruction of the 17th century. 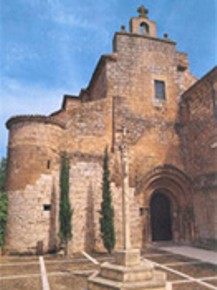 The former document that mentions the existence of a Monastery is a privilege of Garcia the 1st, the King of León, bestowed the 15th of February 911.

But the distant origin credibly lies in the late Roman Age in relation with Villa Posídica, a Roman Villa whose ruins are around two hundred metres far from the monastery where some precious mosaic have been found and which seem that they belonged to the family of  the Emperor Teodosio. It is very likely that the river Pisuerga has taken its name from this Villa.

The most daring theory situates the house and the community of the religious women which the pilgrim Egeria or Euquería heads to in her famous Itinerarium from the 4th to the 5th century.

In any case, it was in its surroundings – called castrum domnas in the past – where the community of nuns that led to the toponym of the Monastery – Saint Isidro de (las) Dueñas – subsequently the village of Dueñas took its name, settled down.

It is almost certain that we will have to thank the domnas for the arrival of the relics of the monastery patron saint, St. Isidoro – martyr from Alexandria – also known as “de Quíos” taken from the Greek Island where he endured martyrdom and died in 251 during the persecution of the Emperor Decio. There are others, slightly baseless, who state the arrival of the relics in the Clunic era of the Monastery.

During the Visigothic Period, there should be a dual monastery in the surroundings – the nuns in St. Isidoro and the friars, maybe in St. Juan de Baños, around three or four kilometres far, under the ownership of St. Martin of Tours.

Once the nuns disappeared due to the Moslem invasion, Alfonso III the Wise (866-910) restored the Monastery in order to grant it to the monks that came from Córdoba, escaping from the Islamic domination. His son, the King Sir García (+914), a great benefactor of the Monastery as his father did, was the one that returned the distinguished relics to the site of Saint Isidoro the Martyr. 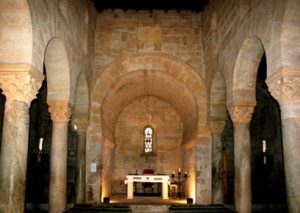 It is worth to consider the possibility that the dual monastery resumed in the area after the restoration since an old reference, not studied thoroughly yet, places the nuns´ disappearance in 950, date when a Moslem incursion would have finished off the life of the community and its last abbess, Esmaragda. Then, the monks would occupy her position, incorporating the nuns´ ownership to their own one in St. Martín.