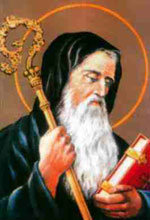 While on earth, Saint Benedicte (480-550) was a not very well known Italian abbot.

In fact, around forty-five years after his death, the Pope Saint Gregory the Great wrote about his life in his `Book of Dialogues´, one of the most divulged books in the Middle Age. 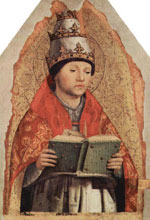 In this book, it is said that Benedicte was born in Central Italy, in the province of Nursia, maybe in the year 480 and he was sent to Rome to be educated in the liberal arts.

But disappointed with the atmosphere of the students, he left the school, being “wisely ignorant and unawarely wise” and after selling all his belongings, he went to the village of Afide with his nursemaid, about thirty kilometres far.

In Afide, he went near Subiaco in solitude, where he lived in a cave for three years.

During that period, Benedicte was provided with bread by a friar called Romano from a nearby monastery who also instructed him in the practise of the ascetic life. Little by little, some disciples started to settle around him and Benedicte organized them into groups of twelve, designating an abbot for each group.

Eventually, he migrated to the summit of the Mount Cassino which rises up Vía Latina, half way between Rome and Naples.

Here he built a Monastery for an entirely coenobitic community which he led up to the end of his life. He died roughly between the years 546 and 550 and was buried in Cassino.

In `The Dialogues´, Gregory makes only a reference to the Rule of Saint Benedicte:

“He wrote a Rule for the monks, notable for its discretion and the clarity of its language. If someone wants to know more about his life and conversation, can find all the details of the teachings of the Master in this same institution of the Rule, since the Man of God could not teach another thing but what he was living.” (PL 66, 162)

The Rule which Benedicte provided us with belongs to a group of monastic rules strongly interconnected that were penned in Italy and in the south of Gaul during the first half of the 6th century. 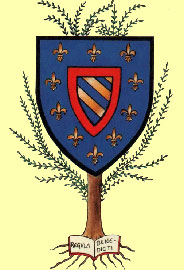 EThese monastic rules explained the life that a cenobite must lead, that is to say, a monk or a nun who retreats from the world and joins a community to live there with a greater demand and fidelity to the Christian life, in an atmosphere of solitude and quietness.
In particular, in the Rule of Saint Benedicte, its prologue and its seven first chapters form a hortatory treatise about the ascetic life and explain its aims and the characteristic virtues that a monk must struggle to cultivate with obedience and humility standing out.

The next thirteen chapters contain detailed instructions for the order of the divine office: the regular succession of prayers, lectures and psalmodies which constitute the structure of the day of a monk. 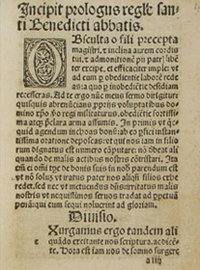 Prologue of the Rule of Saint Benedicte

After, there is a series of chapters which deal with constitutional issues such as the election of the abbot and the role of other monastic officials, norms for the sleeping hours, the manual work, the reading and the meal times.

All in all, the Rule offers a practical guide not only for the government of the coenobitic community but also for the spiritual life of the monk.