The Origin of the Order

Our origins go back up to the year 1098 when a small group of friars, led by the Abbot Robert, came out of the Monastery of Molesmes and settled in a place called Citeaux which they named Novum Monasterum with the intention to follow the Rule of Saint Benedicte in all its purity. The story is written up in a foundational deed called “Exordium Cistercii” or in its shorter version “Exordium Parvo”.

The early years were difficult; Robert came back to Molesmes. It is unknown whether it was at request of the monks of Molesmes who asked the Pope for his return or due to the difficulty of the life that there was in the place. Then, Alberico became the abbot, elected in 1099 and upon his death in 1109 – Esteban Harding, an English friar who belonged to the foundational group, succeeded him. The latter was the one that in 1113, admitted a young man, Bernard de Fountains, son of a family of landowners from Burgundy, who was accompanied by thirty men, many of them of the same family. 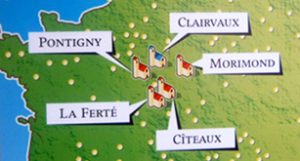 Soon, Citaux started to found monasteries. First La Ferté came to the South of Cister in 1113, still in the diocese of Chalon. This was followed by Pontigny in 1114 and in 1115, two monasteries, Morimond and Clairvaux appeared. The latter led by Bernard; furthermore, it was located in a place owned by his family. From this point, the order will continue growing.

After Saint Benedict’s death in 1153, the Cistercian order was expanded all over Europe with three hundred and forty-three abbeys. Which one was the explanation for such a spectacular success? On the one hand, its universal appeal in all levels of society since it opened the faculty to the peasants and the craftsmen thanks to the creation and the impetus of the lay brothers who were able to capture the changes in the demographic and economic field in Europe in the Middle Age. In addition, the clergymen and scholastics joined the Order from the very beginningdoubtless attracted by the personality of Saint Benedicte.

This monk exerted his influence on the society in those times, being the most incomparable apologist of the Order. During thirty years, he was a mentor or Popes, advisor of Kings and Cardinals, `doer´ and `undoer´ of Bishops. His preaching encouraged the nobility in France and Germany to launch the second crusade. As well as his writings, letters, sermons and treatise. The fame of Benedicte as a preacher, his reputation as a saint and his legendary mortifications gave publicising to the Cistercian aim that they would have never had without him.